WHEREAS: Large Capacity Ammunition Magazines, generally defined as magazines capable of holding more than ten rounds, are feeding devices that may hold as many as 100 rounds of ammunition; and

WHEREAS: Large capacity ammunition magazines have been used in most mass shootings of innocent civilians, including:

WHEREAS: In a review of 62 mass shootings between 1982 and 2012, large capacity ammunition magazines were recovered in 50% of them. Mother Jones, “A Killing Machine: Half of All Mass Shooters Used High-Capacity Magazines,” January 2013; and

WHEREAS: A recent study on mass shootings found that restrictions on large capacity ammunition magazines could potentially reduce mass shooting fatalities by 11% to 15% and total victims shot by 24% to 26%. Christopher S. Koper, Assessing the Potential to Reduce Deaths and Injuries from Mass Shootings Through Restrictions on Assault Weapons and Other High-Capacity Semiautomatic Firearms, Criminology & Public Policy, 2020, and

WHEREAS: Limiting ammunition magazines to a capacity of 10 rounds would require a shooter to pause to change out the magazine more frequently and could result in lives saved; and

WHEREAS: The Large Capacity Feeding Device Ban Act of 2020 would ban possession, manufacture, purchase, sale or transfer of any ammunition-feeding device capable of accepting more than 10 rounds, and

NOW, THEREFORE, BE IT RESOLVED: That the Jamestown Democratic Town Committee respectfully requests that the Rhode Island General Assembly affirmatively vote for, and that Governor Gina Raimondo sign into law, the Large Capacity Feeding Device Ban Act of 2020, H7264 and S2130; and that a copy of this resolution be provided to Senator Dawn Euer and Representative Deb Ruggiero, the chairs of the House and Senate Judiciary Committees, the House Speaker, the Senate President, and the Governor.

At their September meeting, the Jamestown Democratic Town Committee unanimously voted to support a resolution calling upon all elected officials at the local, state, and national levels to work toward a ban on the sale and use of assault type weapons.

Assault type weapons with high capacity magazines have been responsible for the carnage in El Paso, Texas; Dayton, Ohio; Parkland and Orlando, Florida; and Newtown, Connecticut.  The committee cited these cases, the legal precedent of the 2008 ruling of the Supreme Court that “dangerous and unusual weapons” may be banned, and the political precedent of the seven states and the District of Columbia that have already enacted legislation restricting assault weapons in support of their resolution.

The resolution has been forwarded to the Jamestown Town Council, state elected officials, and members of Rhode Island’s congressional delegation.  To read the complete resolution, click here. 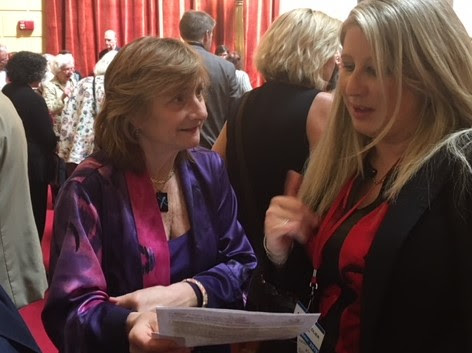 Rooftop solar arrays have been popping up all over Rhode Island, bringing clean energy and decentralizing generation to enrich the state’s electric resources, all while creating thousands of new jobs with dozens of solar installation companies.  But like in any other rapidly expanding industry, there have been some complaints from customers who say their experiences have not been all sunshine and lower electric bills.

Rep. Deborah Ruggiero — a strong proponent of renewable energy who has sponsored laws that helped pave the way for the industry’s rise — is urging state regulators to implement consumer protection measures to ensure that Rhode Island solar customers are getting what they’re promised.

“While there are excellent opportunities and incentives that can make residential solar projects very rewarding, there are many installers doing the work now, and they are not all equal. Consumers need some assurance that the installer is offering them a product that will work for their site. They deserve an honest representation of the energy and savings their system is likely to produce. They need to know the risks, too. If companies want to benefit from our state’s incentive programs, they must be willing to adhere to good business practices that protect consumers,” said Representative Ruggiero (D-Dist. 74, Jamestown, Middletown).

She has proposed legislation (2019-H 5991) seeking to have the Office of Energy Resources adopt greater consumer protection measures for homeowners who invest in solar. She is optimistic that the adoption of a disclosure form will protect Rhode Islanders from unfair practices by installers. If not, she plans to introduce more stringent requirements, she said.

Deck Work on Newport Pell Bridge begins Sunday May 12th.  In my meetings with RITBA they say there will NOT be any lane closures during rush hours for initial phase of the work (work will be done mostly at night).   During non-rush hours 9am to 3pm and overnight from 7pm to 5:30am there WILL be lane closures.

There are two public hearings next week for more details and if you’d like to ask specific questions:

WED. MAY 15th   6pm at RITBA headquarters in Jamestown

Please call or email me anytime.